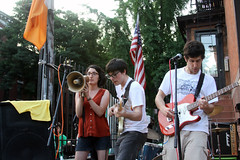 Well we had a great time playing live outside in Fort Greene Brooklyn during the Summer Solstice for Make Music NY, even though they foiled our elaborate stage set up involving the statue of General Fowler and we instead played in front of Mullanes Pub / La Bagel Delight, we still had a great time. We promised a 90-minute set, but got a bit of a late start (we brought all our own stuff even the extension cords, PA, speakers, drum rug, everything!) and were cut off at 8pm so we didn’t get to play all of the songs we’d rehearsed for the show. Oh well, maybe some day we’ll do a 90 minute set but for the foreseeable future all of our sets will be under 30 minutes. Thanks to all of the people who watched us including our friends, Cecil Taylor, people doing their laundry, and these kids who have AMAZING DANCE MOVES to the song “YouTopia” 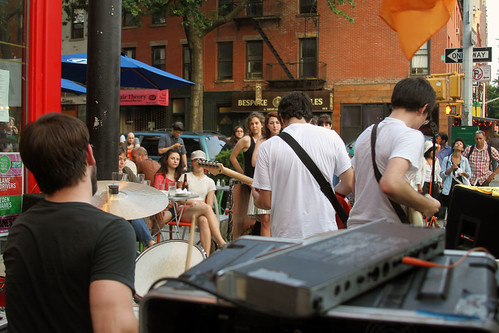